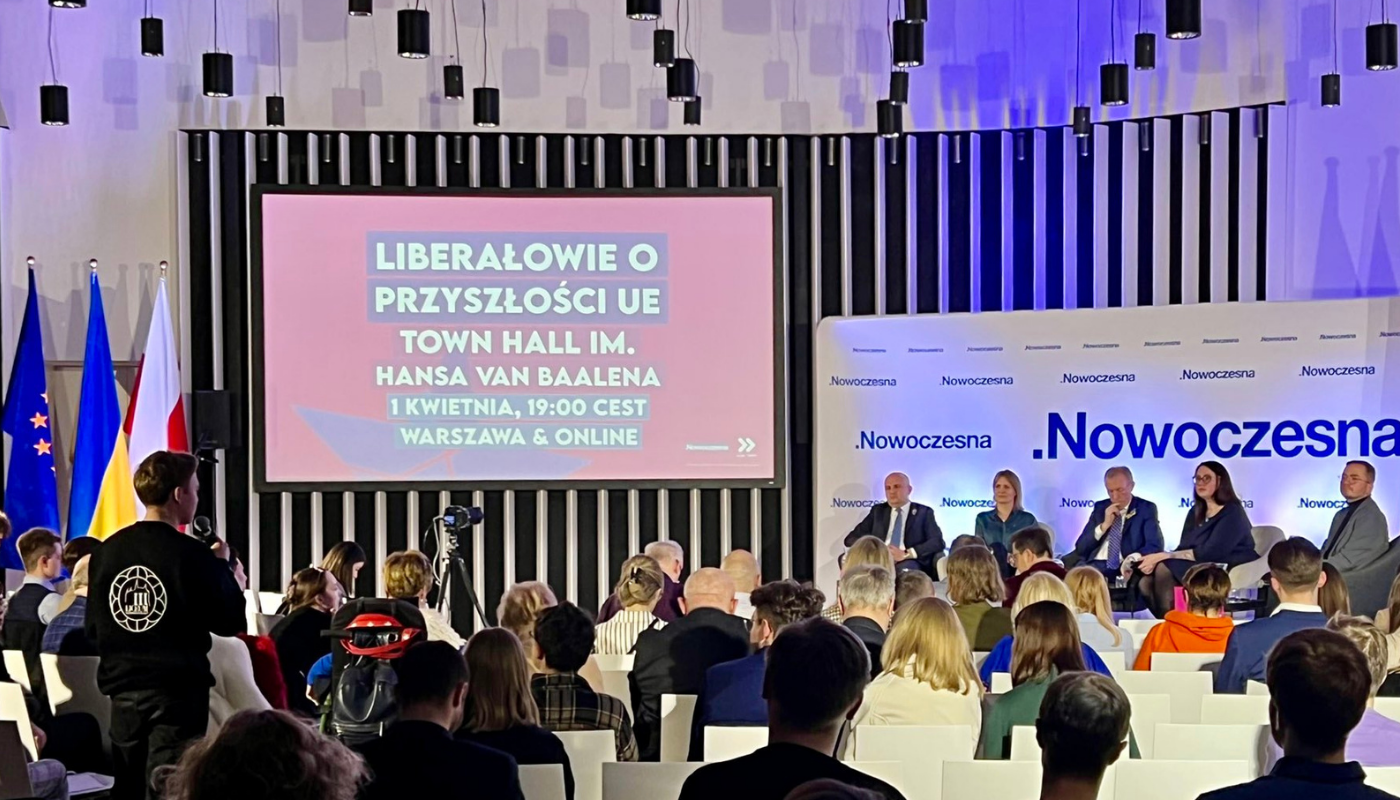 The 6th Hans van Baalen Town Hall meeting on the future of Europe took place on 1 April in Warsaw, Poland, and was hosted by ALDE Party Polish member, Nowoczesna.

Ilhan Kyuchyuk MEP and Senator Timmy Dooley, ALDE Party acting Co-Presidents, Evelina Dobrovolska, Minister of Justice of Lithuania, and Karolina Zdrodowska, Director-Coordinator in the City of Warsaw and AOH Alumna, discussed and listened to the ideas and questions of more than 150 citizens on key issues for Europe’s future:

The Town Hall meeting was moderated by Dr. Milosz Hodun, Vice-President of the European Liberal Forum.

Dobrovolska emphasized that unity and independency are key principles that EU Member States need to follow when addressing the war in Ukraine. “Rule of law means responsibility of Putin’s and Lukashenka’s aggression”, she added while reminding that the EU must live up to its values and take action.

When referring to Europe’s security, Dooley stressed that “it is not only about the military aspect but also about security of food, security of energy” and therefore Europe must reach independency quickly and under strong leadership. He also stressed the importance of the younger generations when deciding on the future of Europe.

Speaking about the impact of the Ukrainian war in Europe, Kyuchyuk underlined that “this is a wake-up call for Europe. It is time for Europe to come with a strong agenda on security”. Moreover, when looking back at the origins of the Conference on the Future of Europe and the current challenges, he stressed that “the debate is not about more or less Europe but about a more efficient Europe or a Europe á la carte”.

Zdrodowska called for the European Union to put pressure on the Polish government and not forget about its rule of law breaches and violation of human rights, in particular the rights of the LGBTIQ+ community.

Did you miss the event or simply want to rewatch it? A recording is available in this link.

Since the launch of the Conference on the Future of Europe in 2021, ALDE Party has been playing an active role to bring citizens and national and European representatives together in the development of the Conference. Starting in September, we have been hosting a series of Town Hall meetings, named after our late President Hans van Baalen, with the aim of listening to citizens’ worries and care-abouts and put their voice in the spotlight. Find out more here.

It’s always impossible, until it is done! #EU should be inspired by this quote of Mandela. #Ukraine️ fights for tomorrow today! Excellent debate in #Warsaw with @ALDEParty @Nowoczesna @timmydooley @ilhankyuchyuk @EveDobrovolska @MHodun pic.twitter.com/0ikemNtqhT

This weekend I'm in #Poland for another Hans van Baalen town hall meeting on #CoFoE and our party member @Nowoczesna congress. I'm happy to see so many liberal minded people in Poland and we have to recognize the unbelievable job they have done in hosting #Ukrainian refugees. pic.twitter.com/rlG4hitO6H