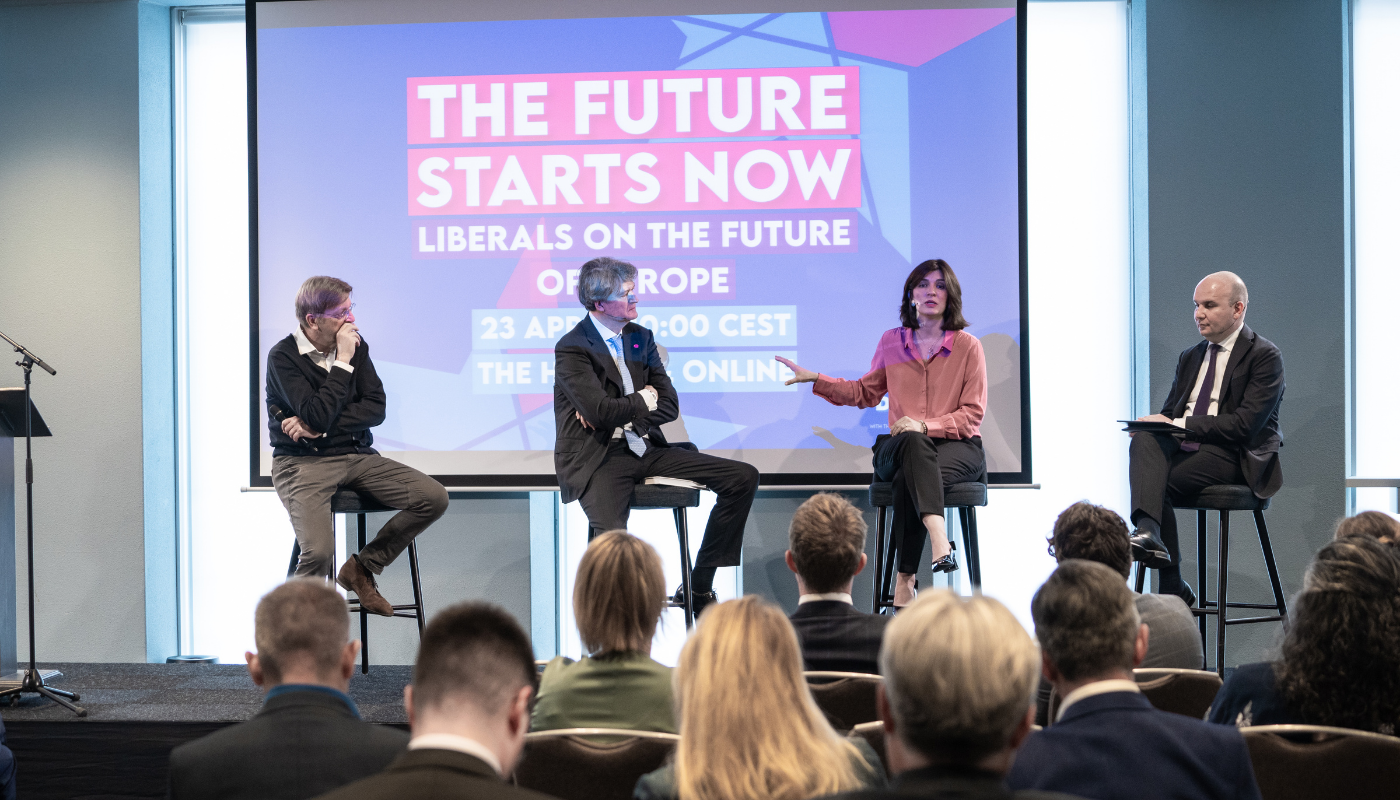 To mark the end of ALDE Party’s Action Plan on the Future of Europe and ahead of the last COFOE-dedicated plenary debate, ALDE Party in collaboration with its Dutch member VVD, organised a day-long conference, "The future starts now - Liberals on the future of Europe", to discuss all the inputs gathered throughout the Action Plan, particularly at the Hans van Baalen Town Hall meetings and the digital hub, with a line-up of distinguished speakers.

“We put European citizens at the centre of the debate on the future of Europe and listen to their worries and proposals […] This is what it has been all about from the start: the citizens. Only with the citizens can we bring our European project forward”, Dooley remarked.

“The future of the European Union is about how to regain sovereignty in a world dominated by empires…the answer is to have a real European Union!”, Verhofstadt stressed during his keynote speech.

“[Citizens] don’t want small steps. They want solutions. Solutions are always a bit painful but can be very rewarding at the end”, Cseh stressed while encouraging politicians to lister to what citizens have to say.

“The future of the European Union is about how to regain sovereignty in a world dominated by empires…the answer is to have a real European Union!”

The event continued with two panel discussions, in which the speakers discussed a series of ideas proposed by citizens throughout the Action Plan as well as questions from the audience.

The fist panel discussed the role of Europe at the global stage. Sabina Ćudić, Member of the Bosnia and Herzegovina parliament, Guy Verhofstadt MEP, Co-Chair of COFOE Executive Board, and Helmut Brandstätter, Member of the Austrian parliament, discussed Europe’s defence and security and its relationship with NATO, the future of EU enlargement and the impacts of the war in Ukraine. The debate was moderated by Ilhan Kyuchyuk MEP, ALDE Party acting Co-President.

The second panel focused on EU democracy and the next steps for COFOE. Katalin Cseh MEP, Dan Barna, member of the Romanian parliament, and Adrián Vázquez Lázara MEP, Chair of European Parliament Committee on Legal Affairs, discussed how to strengthen democracy in the EU, especially in the institutions as well as how to bring citizens closer to the EU. They also reflected about rule of law and human rights in Europe. The debate was moderated by Lennart Salemink, VVD International Secretary.

🇪🇺 Be bold, be curious & engage with citizens where they are 🇪🇺

Important words from MEP @katka_cseh on the future of our fight for liberal democracy and human rights in Europe! pic.twitter.com/p5RsTCzlJg

Thank you @ALDEParty and @VVD for inviting me to participate on this great panel on the #CoFoE along with my liberal colleagues @katka_cseh, @DanBarnaUSR and @lennartsalemink.#StrongerUnited pic.twitter.com/7ic7HlB7Bf

Thank you @katka_cseh and @AdrianVL1982 for a very interesting discussion about the future of Europe. It’s always a pleasure to be alongside the @ALDEParty liberal family. Thank you also to our amazing hosts @VVD for moderating the discussion. pic.twitter.com/cXOf706oHE

To close the event, Ilhan Kyuchyuk MEP, ALDE Party acting Co-President, stressed the importance of the Conference on the future of Europe as well as the role that ALDE Party has played during its duration. Moreover, Kyuchyuk presented ALDE Party’s input to the COFOE, which can be found here.

“I hope that the liberal democracies as we know them will prevail and that our ideas, our liberal ideas, will prevail”, Schreinemacher said.

Did you miss the event or simply want to watch it again?

Relive the event’s highlights below!

The future 🇪🇺 of starts now! Today’s #COFOE event kicks off this morning with remarks from #ALDEParty Acting Co-President @timmydooley, @katka_cseh and @MalikAzmani 👇

“The future of the European Union is about how to regain sovereignty in a world dominated by empires…the answer is to have a real European Union!”