ALDE President welcomes the Conference on the Future of Europe

After a long wait, ALDE Party President Hans van Baalen is pleased to see the development on the Conference on the Future of Europe, following ALDE Party’s council resolution on the topic. A plan to organise ALDE Party’s own Conference later this year is also in place.

🇪🇺Finally, an agreement on the #CoFoE It is up to EU citizens to express their views on future of EU without taboos. There are many roads leading to Rome.@ALDEParty had its own Council resolution on this and will organize a Conference later this year to give its integral input! https://t.co/zI91jMI8fc

The Conference aims to bring citizens closer to the European decision-making processes, with the first formal meeting planned to take place on Europe Day, 9 May. 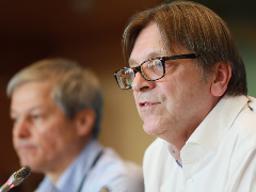 Renew to play a key role in Future of Europe Conference