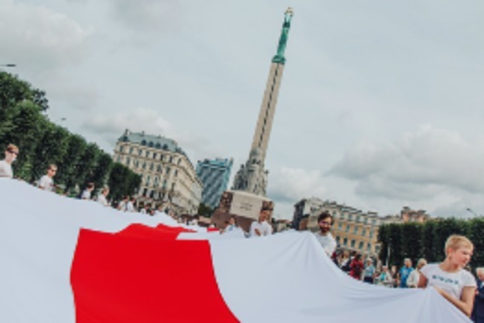 On 23 August 1989, people across the Baltic countries formed a 600-kilometer long human chain to peacefully demonstrate against the Soviet occupation. Yesterday, 31 years later, hands were joined once again across the Baltics, this time in support of the protesters and activists in Belarus who are fighting for democracy and freedom.

In Lithuania, a human chain stretching from Vilnius to the Belarusian border was formed, with liberals showing their support.

“And today, it is our duty to sacrifice short-term, material interests […] that is nothing compared to eternal values, such as personal freedom and a nation’s right to self-determination”, Aušrinė Armonaitė, leader of ALDE party member Laisvės partija, said in her speech.

A human chain in solidarity of Belarus was also formed in the centre of Riga as well as in other locations in Latvia, with ALDE party members Kustība Par! and Latvijas attīstībai joining the demonstrations.

Juris Pūce, chair of Latvijas attīstībai and co-chair of Attistibai/Par! commented: “Belarus civil society’s request for fair and democratic elections and processes in their country remind me about our own situation in Latvia and the Baltic states 30 years ago, therefore we truly support and share aspirations for new, transparent and fair elections in Belarus.”

Kaja Kallas, the leader of ALDE Member Reformierakond, joined the demonstrations that took place in Tallinn. 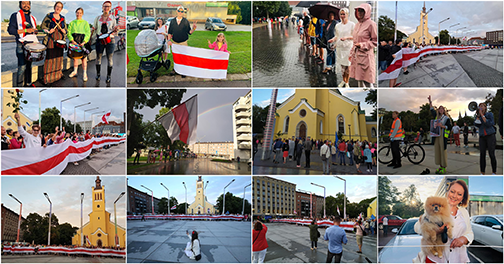 Photo collage from the demonstration in Tallinn

ALDE Commissioner Věra Jourová also reacted to the event, supporting the demonstrators and underlining the importance of free elections.

31 years ago, Baltic citizens united to make a human chain as peaceful demonstration against oppressing regime. Today, 🇪🇪 & 🇱🇻 & 🇱🇹 and others repeated the gesture in solidarity with #Belarus. #FreedomWay
I support them and will always stand for free elections & people’s will. pic.twitter.com/1WSU1ViNxe

ALDE Party President Hans van Baalen has also issued a statement on Belarus, calling for President Alexander Lukashenko to resign. You can read his statement in full here. Van Baalen also shared a timely reminder on the importance of striving together against totalitarianism.

I am pleased to see that last weekend our parties have come together in 🇱🇹Vilnius for solidarity and freedom in Belarus 🇧🇾 It is important to stand united against totalitarianism and strive for freedom across national borders! @darbopartija @liberalai @laisvespartija @ALDEParty

Last week, the ALDE Party Secretariat launched a virtual protest in support of the people of Belarus. You can join the protest by sharing our post on Twitter or on Facebook.