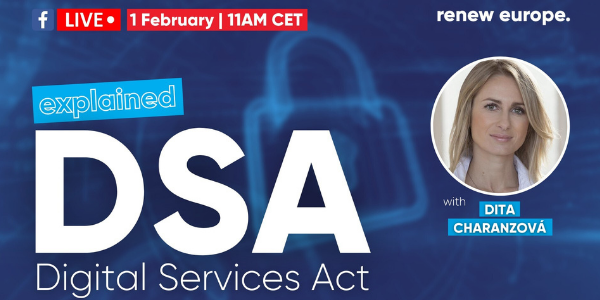 Renew Europe has long called for action to put in place a proportionate, resolute regulatory regime which provides certainty and stability for businesses operating within the EU, while enhancing the rights and protections of EU consumers.

Dita Charanzová MEP, who is also Vice-President of the European Parliament and Renew Europe’s Rapporteur on the Digital Services Act, said:

“The heart of the DSA is about the system, not the content itself. Each case will be different, but the rules on how to treat them must be fair and consistent across the EU and the world. This creates a law and justice system for the internet, but this law is the first step, not the last. There is a lot of work ahead of us.”

The DSA will create a safer digital space for EU citizens and businesses and will provide a level playing field to stimulate innovation, growth, and competitiveness, both within the EU and globally.

Find out more on the DSA Package here.