On this coming Sunday 6 October, voters in Kosovo will vote in early parliamentary elections after the Kosovan Parliament voted to disband itself following the resignation of the Prime Minister Ramush Haradinaj after being summoned for questioning by the KSC in The Hague, Netherlands.

ALDE Party member party the New Alliance for Kosovo (AKR) will participate in an electoral alliance with the Initiative for Kosovo (Nisma) and the Justice Party (PD) for this election. The AKR party, led by Behgjet Pacolli, has participated in coalition government since September 2017 after the party ended months of political stalemate following early elections in June that year. Mr Pacolli has served as the country’s Deputy Prime Minister and Minister of Foreign Affairs.

Speaking at the electoral rally in Pristina to launch the campaign, Mr Pacolli outlined the vision of the NISMA-AKR-PD coalition: "Our coalition will play a crucial role in the next government," he said. “A government that will have lasting goodness with the US and the West. We will aim to make Kosovo a member of NATO, the UN and other vital organisations. We will preserve the integrity and sovereignty of Kosovo and this will be achieved by having lasting ties with the US and the West.”

The colaition’s candidate for Prime Minister Fatmir Limaj said the motto "Together for the State" will be the winning motto of these elections because it guarantees sustainable development and prosperity: “We assure that this coalition will be the voice of the people of Kosovo, the voice of the young and the young. We will support all layers of the country. We will make sure that this coalition is the spokesperson in the Kosovo government for workers to implement the labour law.”

The 120 members of the Assembly are elected by open list proportional representation, with 20 seats reserved for national minorities. The nine-day election campaign began on Wednesday 25 September and will conclude on Friday 4 October, with one day of electoral silence before voting begins at 07:00 on Sunday. 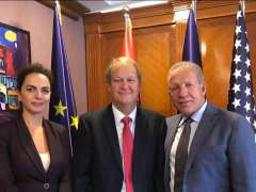 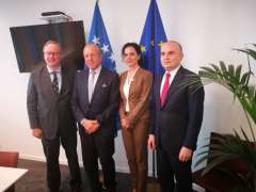 Bureau meets with parties in Kosovo and Macedonia