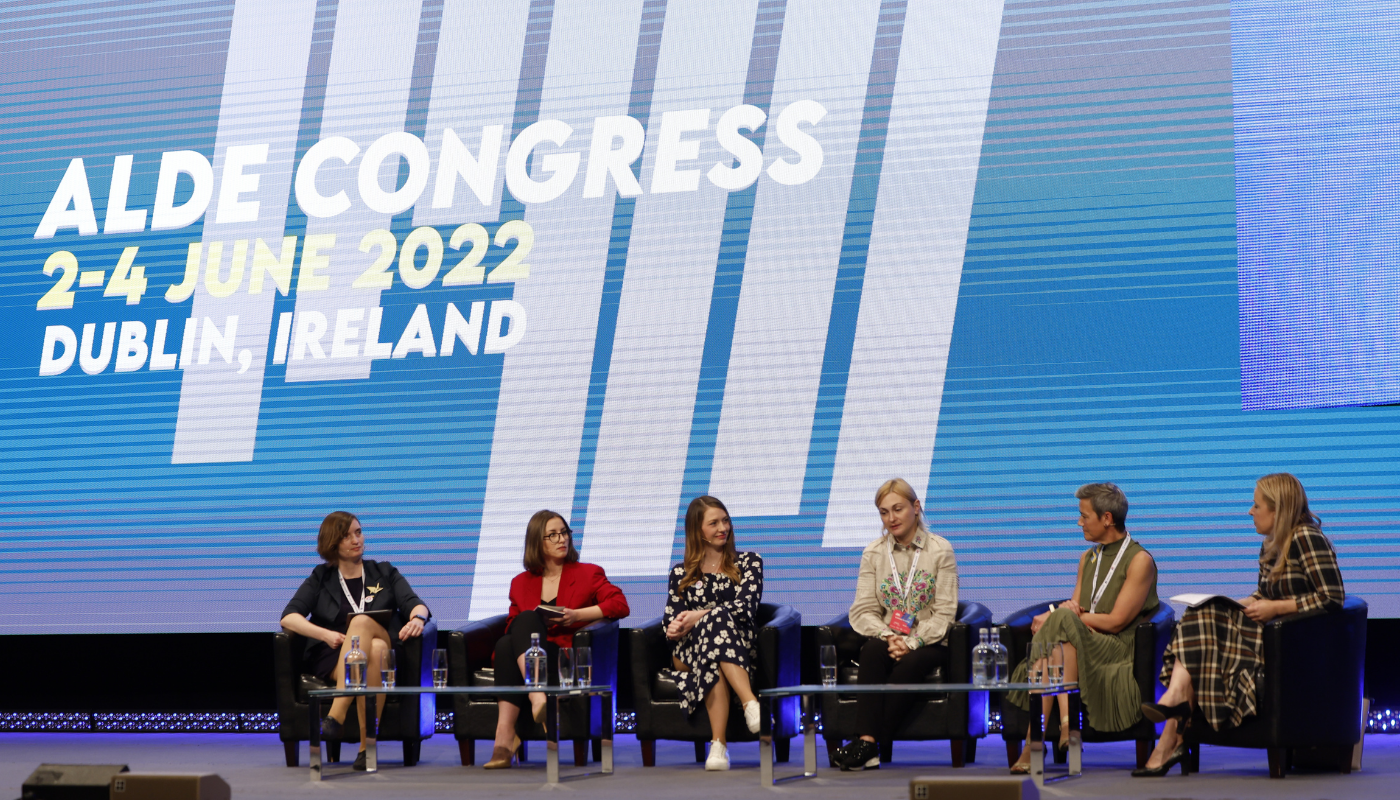 On its second day, the ALDE Party Congress hosted a series of high-level debates in which liberal leaders addressed some of the most important challenges of our time.

The first debate, named “Powering Europe into the future: towards a sustainable, secure, and independent system” addressed the future of Europe’s energy supply in the context of the climate emergency and the war in Ukraine. The debate panel was formed by Kadri Simson, European Commissioner for Energy, Michael McGrath, Minister for Public Expenditure and Reform of Ireland, George-Louis Bouchez, Senator and MR Party Leader, Emma Wiesner MEP, and Raoul Boucke, Member of the Dutch Parliament (D66), and moderated by ALDE Party acting co-President Senator Timmy Dooley.

Mcgrath started the debate affirming that “we need to reduce our dependence on energy imports” and that “ALDE has a key role to play here by pushing for the market-based solutions needed”.

Simson declared that “we should regard renewable energy production as overriding public interest” because “unless we manage to fasten renewable projects the deadline to get rid of Russian imports is too far away”.

Wiesner stated that “the climate issue is an energy issue, and the energy issue is a security issue”. She proposed that “we need to make the energy Union sexy again” and concluded that the REPowerEU Plan “is our chance to spend money in renewable energy”.

Bouchez explained that to become independent from Russian gas and oil “it is important to have the best mix in energy” and in order to do that “the only solution is an energy mix that includes nuclear energy” and “to have a European electricity network”.

Boucke asserted that “the biggest challenge of our time is climate change” and called for “for all MEPs to vote the most ambitious amendments against car emissions” in a vote to take place in the European Parliament next week.

During the second debate, titled “War in Ukraine - European security and migration challenges”, panellists discussed the consequences of Putin’s invasion of Ukraine from different perspectives.

Laanet stated that “we know that Russia would like to influence our internal political life” and that “we do not have to discuss but make decisions quickly because Ukraine is waiting”.

Bernard declared that “the Union has been showing leadership when it comes to sanctions and military supply” and that “this war shows more countries wanting to join the Union as it is seen as a source of protection for its citizens”.

Della Vedova praised that “for the first time the EU acted as a global player in a humanitarian crisis” and insisted that “we need as the EU to change the mechanism of decision making when to comes to foreign policy, we need to overcome the unanimity rule”.

Melby affirmed that “this is a time when we need more collaboration and unity in Europe” and expressed that “everyone in Norway is very happy that Sweden and Finland applied for NATO membership”.

“It is our hope as a liberal party in Norway that this can trigger the debate for future EU membership for Norway,” she concluded.

The session concluded with Guy Verhofstadt MEP presenting a crowdfunding campaign from Renew Europe to assist Ukraine. Find out more about it and how to participate here.

Our next #ALDECongress high-level panel is starting now! Join us to discuss the war in #Ukraine, European security and migration challenges 🇺🇦🌍 pic.twitter.com/ekd8s5YWSa

The panel was formed by Margrethe Vestager, Executive Vice President of the European Commission & European Commissioner for Competition, Yevheniya Kravchuk, Member of the Ukrainian Parliament, ALDE Group Vice-President of the Parliamentary Assembly of the Council of Europe, Anna Júlia Donáth MEP, Lucia Plaváková, Deputy Party Leader of Progressive Slovakia and Anastasia Burakova, Alliance Of Her Alumna, Russian democracy and human rights activist, and moderated by Eva De Bleeker, Secretary of State for Budget and Consumer Protection of Belgium.

Vestager started the debate asserting that “autocrats fear independent thinking” and that “there is something magic that happens when people from different genders and identities exercise power”.

Kravchuk gave her testimony on how she and her colleagues formed the “Women’s Diplomatic Battalion” to provide Ukraine with international support after Putin’s invasion. She explained that “women are not only weak during the war, but they can also be active on their way to bring victory”.

Plaváková exposed the worsening situation of women’s rights in Slovakia and declared that “our party in Slovakia is the most vocal supporter of women’s and LGTBIQ+ rights”.

Donáth pushed forward the idea that “we should learn to empower each other to empower more people and women that are not there yet”.

“I hope that one day that Russia will be in the big European democratic family and become a democratic country,” she concluded.

Today’s final high-level debate kicks off now! Join us in the Auditorium to discuss women’s political representation and the fight for democracy with our distinguished panellists ♀️💪 #SheWillBeHeard pic.twitter.com/V6sscfxid0

Watch the highlights of the panel debates here or below.