Liberals celebrate Pride every day of the year!

Pride Month is held each year in June to honor and celebrate the LGBTQIA+ community and campaign for equal rights – a fight that Liberals are committed to during Pride and every day of the year.

Celebrate Pride every day with our KISS ME, I’M LIBERAL sticker to adorn your notebook, laptop or your favourite water bottle.

Worldwide, LGBTQIA+ persons are still prosecuted in 69 countries, and in 11 countries threatened with the death penalty.

Liberals are taking action to remove these barriers to equality.

Homophobia has no place in Europe

In the past years, ALDE Party have campaigned extensively against the so-called LGBT free zones and for a more tolerant and open society in Poland. We spearheaded grassroots support and managed to declare the EU a LGBTIQ Freedom Zone! We salute the recent decision of Poland’s highest administrative court to uphold the annulment of homophobic resolutions adopted by local authorities.

Many countries impose on blood donations from gay and bisexual donors. ALDE member parties Free Democratic Party (FDP), People’s Party for Freedom and Democracy (VVD) and Progressive Slovakia (PS) and others are working hard to remove these barriers and make Europe a more inclusive place

Conversion therapy also still exists in Europe. Working hard to outlaw it, Swedish Liberals as well as the Swedish Center Party, Dutch VVD and D66, UK’s Alliance of Northern Ireland and the Liberal Democrats, Austria’s NEOS and Belgium’s Mouvement Réformateur all stand united on this front.

Last year, the Hungarian Parliament passed another homophobic law that limit the freedoms of LGBTQIA+ individuals and education in Hungary. During the recent ALDE Party Congress, we adopted two resolutions to reaffirm our support to the LGBTIQ+ community underlining the fundamental and liberal values in relation to religious beliefs and our will to eradicate LGBTQIA+ phobia.

This year, the Rainbow Platform, a pan-European initiative to increase LGBTQIA+ representation in European politics, hosted an event at the ALDE Party Congress in Dublin. At the ceremony, liberal leaders from across Europe have spoken up on the issue of low LGBTQIA+ representation and, by signing the Dublin Diversity Declaration, pledged to better it on a European, national, and local level. 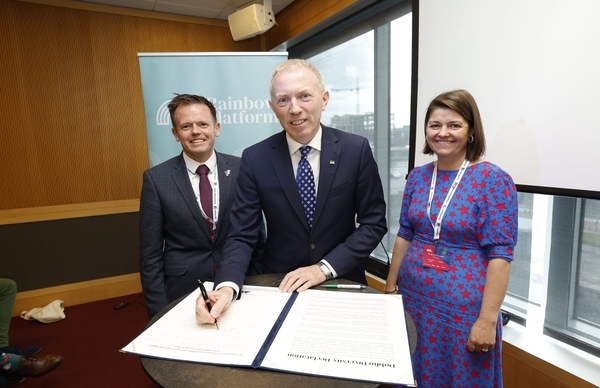 Attending the Pride parade in Belgium, Mouvement Réformateur President Georges-Louis Bouchez sent out a clear message, that MR reaffirms its commitment to the queer community. Likewise present at the parade, Open VLD’s OUT of the Blue network showed its support for the LGBTQIA+ community. OUT of the Blue is an Open VLD membership-based network dedicated to the LGBTQIA+ community and allies, and is chaired by President of the Belgian Senate Stephanie D'Hose. “Being yourself in complete freedom. That is what we, as liberals, will continue to fight for,” declared Open VLD president Egbert Lachaert on this year's IDAHOT Day. 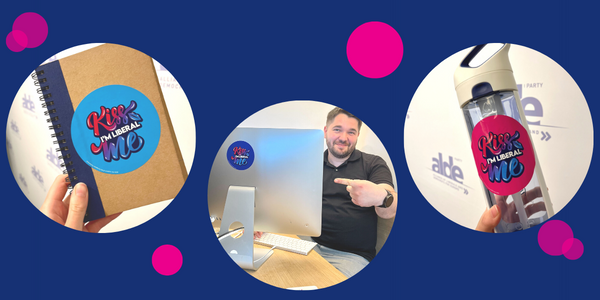 I want a sticker!

"Where Pride marches, peace breaks out". This is what the leader of +Europa, Emma Bonino, said on her social media channels, posting a photo with the rainbow flag on the occasion of Pride. "Pride, born as a revolt against the discrimination suffered by the LGBTI+ community, today is a reliable thermometer to understand the degree of health of a democracy: where citizens parade in their freedom, all citizens live better".

"Love will win", said Lithuanian Laisvės partija, participating in the Baltic Pride Parade. "We continue to work consistently so that everyone in our country can be confident and have equal rights”, they added. Lithuanian Liberal Movement also invited supporters to join "a celebration of diversity and equality and an opportunity to express support for the equal rights of LGBTQ+ people".

Centar President and Mayor of Split Ivica Puljak attended a Pride March in the city of Split, Croatia. "Split is a city of love", he declared.

In Denmark, Radikale Venstre promised to "fight hard to set people free to live the life they want and be who they are - both in Denmark AND the rest of the world".

“Modern Poland is colorful Poland”, declared Nowoczesna leadership as they attended a Pride Parade in Warsaw earlier this year.

“Hate, intolerance and discrimination have no place in our Union”, said Estonian Prime Minister and leader of the Reform Party Kaja Kallas. "That's why today and every day, we stand for diversity and LGBTI equality so that our future generations can grow up in a Europe of equality and respect."

Such a Europe must show tolerance and respect to a part of society that is twice stigmatised: queer sex workers. “To include is to validate”, declared the liberal Radicali party of Italy. "The double stigmatization affects the sex workers, a double suffering that must be fought, torn away from the bodies and names of the people who choose this job."

Showing tolerance is what the Latvian liberal Vincas Jurgutis chose to do when, as a member of the City Council of Vilnius, he proposed to name a street in Vilnius as "Tolerance street", later adopted by the Council.

Sadly, heinous acts of violence are still perpetrated against the queer community. ALDE Party stands with the victims of the Oslo shooting and reaffirms its commitment to making Europe a safe place for all its citizens.

"To love is a human right. Today we stand together against hatred, for love and for freedom", wrote Norwegian Venstre.

"We must not tolerate hatred in any form. Every attack against LGBTI people must be condemned", wrote Progressive Slovakia Vice President Lucia Plaváková.

Swedish Center Party’s Annie Lööf lent her support to Oslo as well, asserting that "the struggle for and defense of liberal democracy and human rights and freedoms is more important than ever."

Our fight to end discrimination must continue!

If you’d like to support our work, please consider making a small donation to help fund our campaigns. Don't forget, if you donate today you'll get your free "Kiss me, I'm Liberal" sticker!