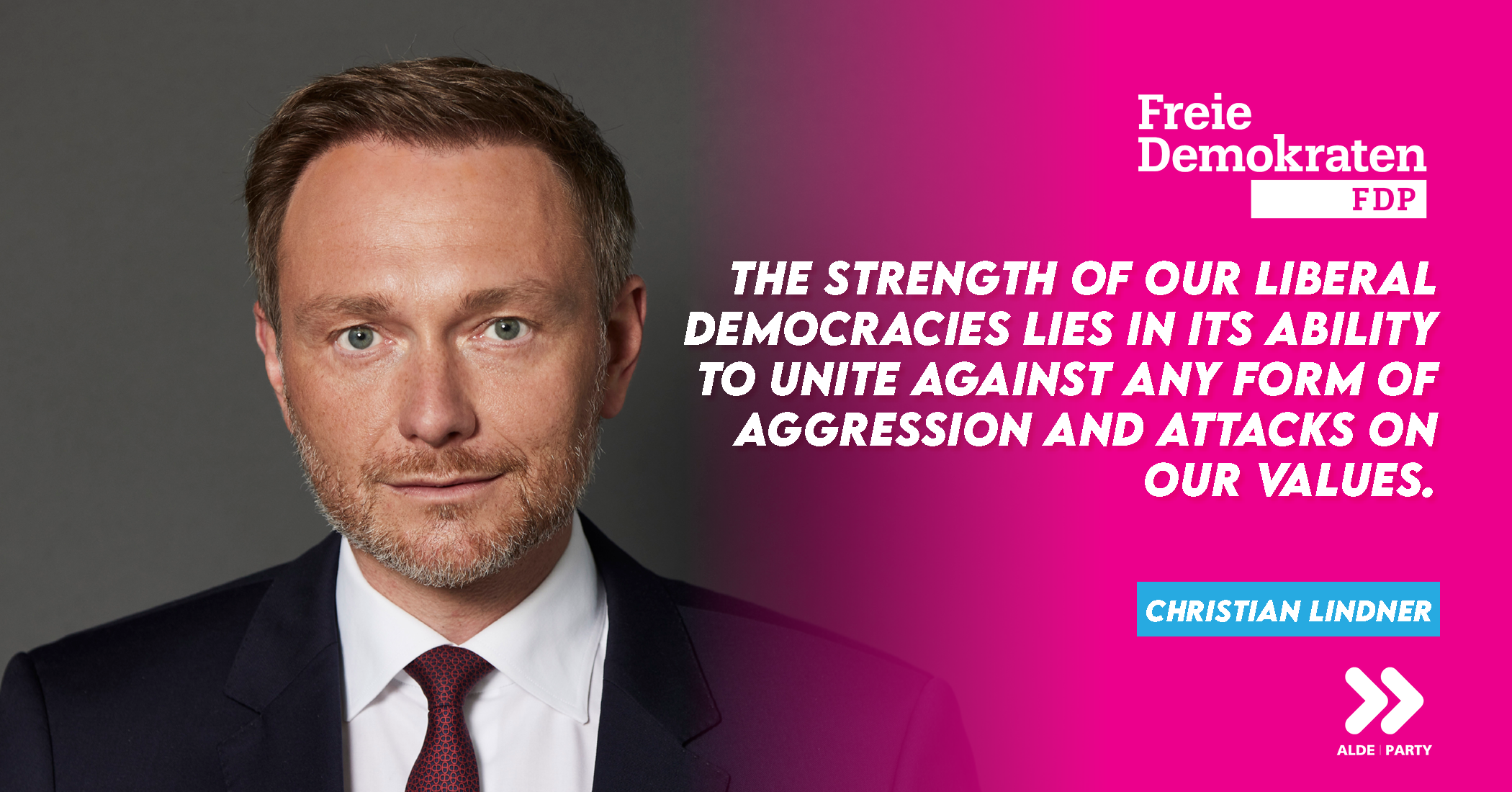 In this interview series, we reach out to some of our liberal party leaders to hear their thoughts on liberalism, Europe and beyond. For this month’s interview, we spoke with Christian Lindner, leader of ALDE member party FDP (Free Democratic Party) in Germany and Federal Minister of Finance, to find out the raise of German liberal in the latest elections, how youth engagement and digitalisation are at the top of the party’s agenda and more.

With almost 10 years as party chairman and now in a ministerial position, how have these changed you personally?

When I became chairman of the Free Democratic Party, we had just suffered a crushing electoral defeat and were voted out of the German Bundestag for the first time in our party's history. At that time, many believed that we would not return to the Parliament. Four years later, after hard work and a great team effort, we were voted into the Bundestag with an impressive result. In 2021, after achieving one of the best results in our party's history, we negotiated the first coalition with the Social Democrats and the Greens to lead our country - contrary to the common expectation that this constellation could not find a common base.

Throughout the past nine years, I have, undeniably, grown older – and I am both grateful and humbled. These years have been challenging, but I have learned not to be discouraged by criticism or negative feedback. On the contrary, I would rather be criticised for my conviction, than being criticised for having none.

You have been engaged in politics from a young age, becoming a Member of the North Rhine-Westphalia’s state Parliament at the age of 21. What would be your advice for today’s youth who are looking for ways to make an impact in our societies and our future?

I strongly believe that both education and a vocational foundation are of great importance for today’s youth to live an impactful life. Additionally, I advise young people to gather personal and professional experiences outside the political spectrum. Combined, these factors serve as a strong basis to develop a well-rounded faculty of judgement, which serves as a big asset - both within and outside of politics. I strived to achieve this to the best of my abilities during my youth, continued to do so during the first years of my political career, and have benefitted from it ever since.

The FDP went from no parliamentary representation to being part of the coalition government in 5 years. In your opinion, what was the hardest and what are the lessons learned from this journey?

For our party, there have been two major lessons we have learned over the course of the past five years: Humility and the importance of being an autonomous political force, while understanding that coalitions demand compromise.

When our party decided against joining a coalition government in 2017, we did so with the conviction that a coalition with FDP-participation had to reflect the values that define us as liberals and which we campaigned on. Yet, when we realised that this could not be achieved, we knew that the choice not to govern outweighed the idea of governing on false premises.

In 2021, this was different: While we were forced to compromise on certain issues, numerous projects and objectives highlighted in the coalition agreements reflect our distinguishable liberal values, for example regarding fiscal responsibility, investments in digitisation and our educational system and social reform.

In the last elections, FDP was the most popular party for first-time voters. What do you think was the contributing factor, and how did you approach them to get the vote?

Indeed, 23% of first-time voters gave us their vote. Also, 21% of young voters between the ages of 18 and 24 voted for us. I believe that young people are longing for a political change. The COVID-19 crisis has mercilessly exposed the structural weaknesses in the areas of education and digitisation. Our young generation has experienced first-hand how ailing our education system is and that Germany is lagging behind with digitisation.

The FDP has the most attractive political platform for young people in Germany: We stand for market-based strategies in climate protection, social advancement, a modern educational system, an adequate and just pension for future generations, digital transformation, and government digitisation. Above that, the Free Democratic Party made sure not to lose sight of young people during the pandemic and to address their most pressing issues and concerns in the Bundestag. The voters rewarded that on election day.

Another decisive factor for FDP’s success among first-time and young voters was our digital campaign. If you want to reach digital natives, you have to meet them online. Next to being omnipresent on major social media platforms, we launched an online campaign that specifically addressed young people, Next Generation @FDP (in German).

With German liberals being part of the new government for more than 5 months, what has changed in the German political landscape?

Undoubtedly, the war in Ukraine has introduced a paradigm shift for Germany: we have shown unwavering support for the Ukrainians, by providing them with weaponry and isolating Russia together with our international allies. Domestically, we passed a 100 billion Euro investment into law, to strengthen the defensive capacities of our military, and thus, reinforcing our commitment to NATO. We have also announced the return to the “debt brake” in 2023, limiting the federal government’s structural deficit. In the past two years, our society has grown accustomed to increased debt and government subsidies. Thus, to counter inflation, a return to fiscal responsibility is essential.  Further, the European Union has grown stronger and more unified, exemplified by the united sanctions implemented against the Russian Federation.

These developments are of major significance, as they embolden us to master the range of challenges ahead: the economic recovery and the digital and ecological transformations of our growth models.

With liberal democratic values being under attack what is the liberal answer to contend the rise of far-right extremists within and outside the EU?

The rise of extremism during the pandemic and Russia’s war against Ukraine reveal, once again, that our liberal values are being threatened both by forces within the EU and outside our borders. These forces aim at destabilising democratic institutions and attempt to undermine the fundamental right of countries and people for self-determination.

As we have shown in our reaction against Russia’s brutal war against Ukraine: the strength of our liberal democracies lies in its ability to unite against any form of aggression and attacks on our values, democratic institutions, and our way of life.

FDP has been member of ALDE Party for more than 40 years. What does being a member of the European liberal family mean for you and your party?

The ALDE family is a source of great enrichment. Being part of an organisation that shares our political values and brings together liberals from all over Europe is extremely valuable. We do not only appreciate all that ALDE Party does in terms of supporting member parties, organising congresses, and developing workshops. We also cherish all the personal contacts we have established over the years through ALDE. Exchanging views, ideas and best practices and learning from each other is crucial to broaden our horizons and grow as a political party.

Which political leader you most admire and why?

Walter Scheel, former FDP-chairman and German President showed the courage to form a coalition with the Social Democrats in 1969. A partnership that had not been forged up until then. Yet, Scheel understood that this was the sole constellation for him to realise his objectives of modernising Germany and unifying both his country and the European continent. Scheel himself stated: "It cannot be a politician's job to sound out public opinion and then do what is popular. The politician's job is to do the right thing and make it popular".

Hans Dietrich Genscher, former liberal foreign minister and architect of the German unity, shared Scheel‘s conviction. As a result, he equally displayed courage during difficult times: In 1982, he discontinued the coalition with the Social Democrats, despite potential risks and public criticism.