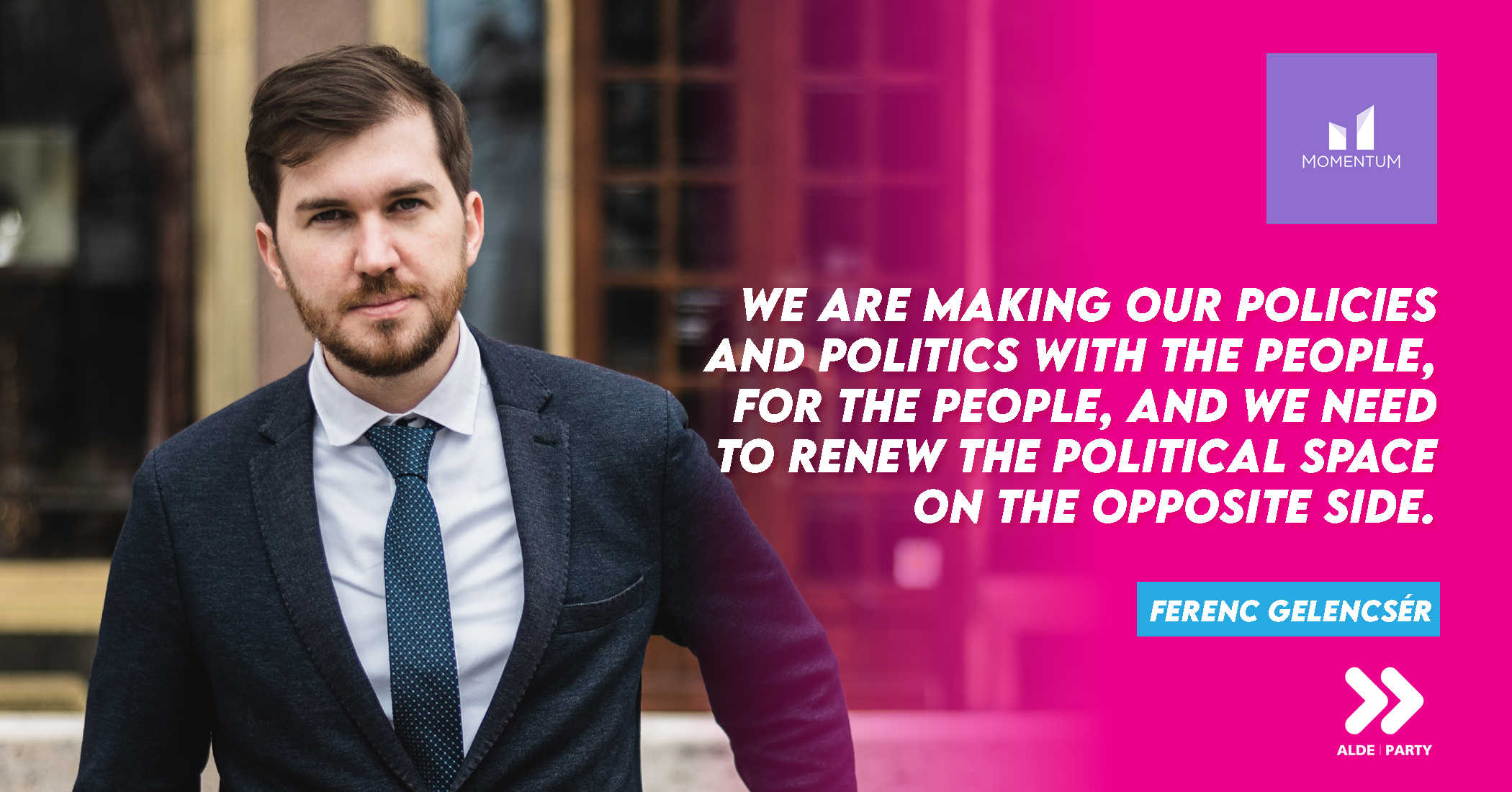 In this interview series, we reach out to some of our liberal party leaders to hear their thoughts on liberalism, Europe and beyond. In this month’s interview, we spoke with Ferenc Gelencsér, leader of ALDE Party member Momentum Mozgalom in Hungary to learn from his experiences on transforming a citizens’ movement into a political party, to hear how the first months as a party leader have been like and to share his vision for our shared future.

Ferec Gelencsér, what inspired you to enter into politics and become one of the founders of Momentum?

I was raised to pay attention to politics, because even though one might not care about politics, it cannot be said the other way around. Almost every single act we take part in is political in a way. Thus, to me the only question is whether we want to be actors of politics or be acted upon.

You were recently elected party leader of Momentum. What is the first thing you want to achieve in this new position?

It is imperative to strengthen the position of Momentum within the opposition. A strong Momentum is a key player for future regime change, since many of the other opposition parties lack authenticity.  Some were given the chance to form a government between 2002 and 2010. They performed poorly, and lost people’s trust.

And what do you do to unwind when you are not working in politics?

Your party Momentum started as a citizens’ movement and then transitioned into a political party. What have been the main challenges of this change? What has worked the best so far?

It is true that the transition phase was a hard and complicated process. In the past few years, the focus of our political activism changed a bit, because we were preparing to be a parliamentary party.

We still have the biggest number of party members, and we still adhere to the movement’s most important values. In summer 2022, we were the leaders and the accelerators of the biggest protests because of the changes in the taxation law. From the west to the east, the Momentum activists were organising protests and closing and blocking roads and bridges.

You have stated that one of your goals is to make Momentum’s policies greener. How are you planning to do this?

The greener and more sustainable future is one of the most important policies of Momentum. Not only because our members and politicians are from the younger generation, but we clearly think and see that the climate issue is no longer just a problem of the future, but actually something that already has an influence on our daily life! The representatives – both in the national parliament and the European Parliament – are working hard on green policies.

Unfortunately, working against the Fidesz’s supermajority is almost impossible but on local level, the Momentum mayors have achieved great things, such as successfully encouraging people to use public transport or biking instead of private cars.

And how do you see the role of Momentum as an opposition force to Orbán’s government? What has the party learned after campaigning in the last elections?

We are showing to Hungarians who are disappointed in the government and the other opposition parties that there is an alternative. Momentum cares about the real problems of the people. That is why we are going to help the people in need in these upcoming winter months. My party’s role is obvious: we are making our policies and politics with the people, for the people, and we need to renew the political space on the opposite side.

The EU’s values and freedoms are currently under attack. How do you see the bloc’s future? What can liberal parties do to highlight the positive aspects of the European Union to citizens?

In these hard times, we can see that a strong and cohesive Europe is necessary for the wellbeing of European citizens. Although there is a frightening trend, where the populist governments and politicians can make their way forward with demagogic messages, I believe that after this crisis – caused by the Russian aggression – Europe and the European Union will stand together stronger than ever before.

In the past decades, the generally emerging level of the European lifestyle was unequivocal, that is why sometimes people couldn’t appreciate it. I think that if we show the greatest achievements of our bloc, people will realise that the European Union is one of the best things that has happened to us.

The ALDE Party Congress in Dublin was your first international event as a party leader. How important was it for you to participate and meet liberals from all over Europe?

The Congress gave me hope. In Dublin, I was able to hear the stories of other liberal political leaders, and those stories were really inspiring. In my opinion, it is really important for Hungarian politicians to see that there is a way out from the current situation and that there are working liberal and democratic countries, like the Netherlands for example.