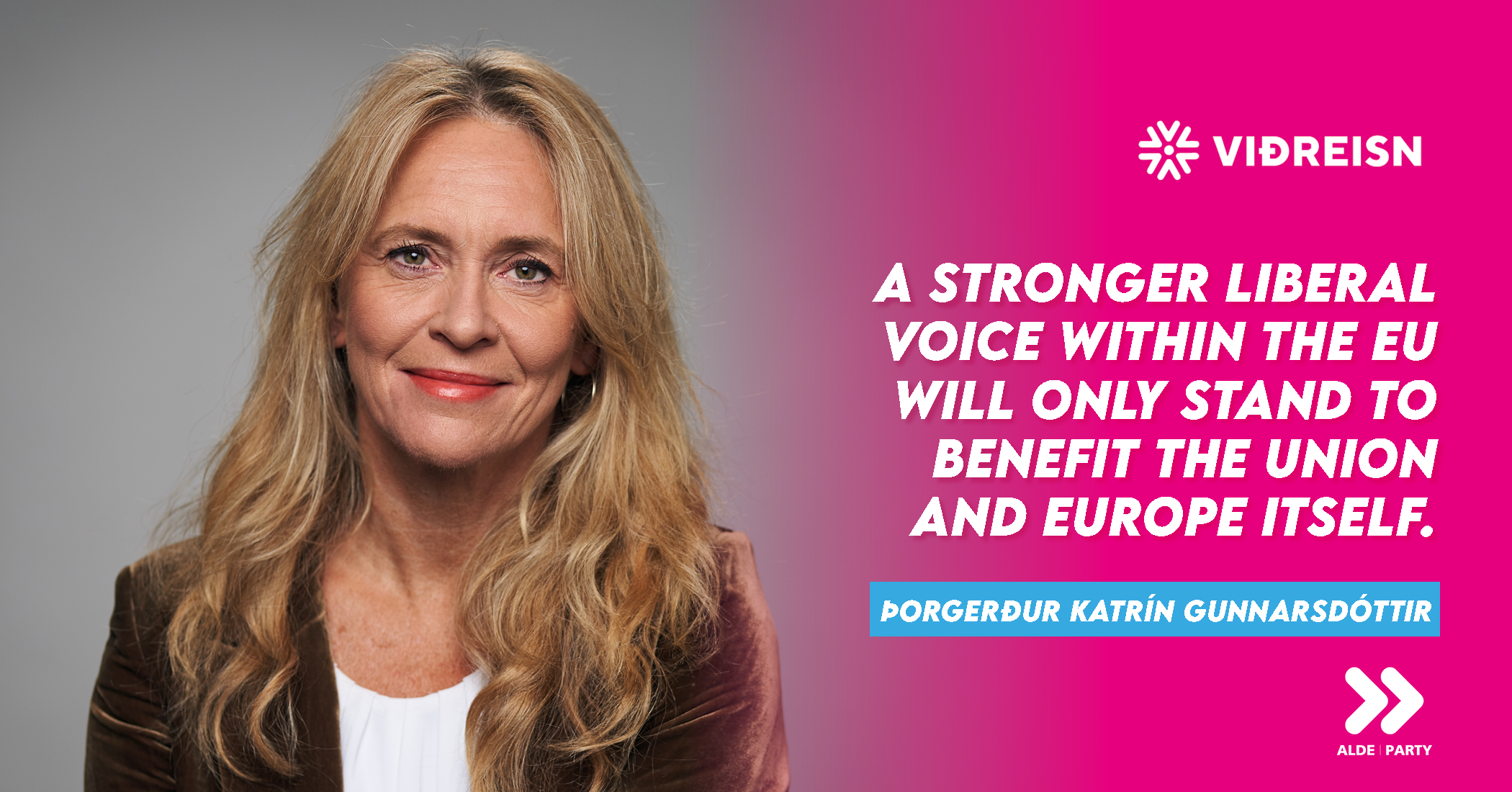 In this regular interview series, we reach out to some of our liberal party leaders to hear their thoughts on liberalism, Europe and beyond. In this episode, we spoke with Þorgerður Katrín Gunnarsdóttir, leader of ALDE member party Viðreisn (Liberal Reform Party) in Iceland. She shared how more people are becoming active within the party, especially young people and her hopes for a future EU membership of the country.

With more than 20 years in politics now as party chair and formerly as minister, how has your professional career changed you personally?

You get to experience a lot, seeing both the good and bad sides of politics. For some people, politics are deeply personal. You can engage in dialogue with those who disagree with you and, perhaps, come to an understanding with some, but it’s impossible to win the hearts of everyone. Above all else, honesty is what matters the most. If people fundamentally disagree with you, then they will at least appreciate the honesty. And honesty is the best way to gain genuine and long-lasting support from those who agree with you.

You were minister of Education, Science and Culture between 2003 and 2009 and Minister of Fisheries and Agriculture in 2017. What would be your advice for young women who are looking for ways to make an impact in our societies and our future?

Just do it. You will undoubtedly face challenges along the way, but you can overcome them with the right amount of passion and willpower. It’s not enough to set your goals; you have to follow through. That can often be a long and complicated journey, but eventually, good things will come if you persevere and continue to follow your dreams.

And remember, mistakes will be made, but that doesn’t amount to failure. Instead, they can often present us with unique opportunities to learn something new and improve ourselves. But we have to be willing to take risks and learn from our experiences with an unbiased mindset. We must stay true to ourselves because, in the end, integrity is what counts.

Which political leader do you most admire and why?

The first one that comes to mind is an Icelandic one, Ingibjörg Sólrún. She’s done plenty of good work throughout her career and been a role model to so many.

Some European and American leaders also come to mind. Of course, it would be easy to name some of the liberal progressive leaders, but I also admire people who evolve and, perhaps, become less conservative with time, like Angela Merkel.

Your party has seen an increase in membership over the past months. In your view, what is the reason behind this considering that many political parties are losing members across Europe?

More people are starting to realize the importance of liberal democracy, especially after waking up to the threat of authoritarian populists, which can very well benefit the liberal parties.

But the Icelandic community is very small; any minor increase or decrease could be a random occurrence. However, I think our message is getting across, and it seems more and more people are becoming active within the party, especially young people, which makes me hopeful about the future.

With the ongoing Ukraine-Russia war. What measures has Viðreisn adopted and what should be the liberal answer to the conflict?

We have supported the government in their humanitarian and economic aid to Ukraine. While also calling for greater support to be provided, although our capabilities are somewhat limited, as we are not a member-state of the EU.

During these times, Europe must come together as one, stand in solidarity with Ukraine, and send a clear message to Putin. We need to provide as much humanitarian and economic aid as possible, both now and afterwards, when rebuilding.

We must show Putin that we will not tolerate the Russian army’s horrific war crimes, which is why greater sanctions are now needed. We have to demonstrate to Russia and the whole world that our support for Ukraine and democracy itself is absolute and unquestioned.

Iceland is a champion on gender-equality in politics, how does your party contribute to that and how can this model be extrapolated to other countries and parties?

During our time in government, after our first elections in 2016, we passed a bill regarding the so-called Equal Pay Certificate, one of our main campaign promises, which, in effect, made Iceland the first country to legally enforce equal pay.

It was already illegal to pay people differently because of their gender, and yet, this vital addition was needed to reduce the gender pay gap and effectively combat discrimination and gender inequality.

Within the party structure, equality has been essential as well. To see this, one need only look at our diverse group of elected representatives and political staff.

How can liberalism help Iceland to progress and succeed in key issues like economy grown and tackling climate change?

A free and open market will benefit society as a whole. We must provide people and businesses with real opportunities and pave the way for new ideas and innovation, which are essential to sustainable economic growth and modernization.

However, when it comes to climate change, we need to use everything at our disposal. Greater cooperation between the private and the public sectors is required, along with considerable action. And developing economies must be supported in an appropriate, eco-friendly way.

Liberal democracy has shown to be far superior to anything else regarding these two issues. Sustainable growth can only be obtained if the people are free. Effective environmental policy can only be implemented when information can be freely accessed, spread with free expression, and tested by debate.

Your party Viðreisn supports the EU accession of Iceland. How do you see the future relationship between Iceland and the EU?

We have now called for a national vote on the matter. Joining the EU would, of course, be in Iceland’s best interest, as we have so often pointed out. It would provide us with greater economic and political security and give us a larger platform to use our voice for the benefit of others.

After the invasion of Ukraine, public opinion started to shift as more and more people are now beginning to advocate for EU membership. It’s hard to tell what the future holds, but I’m optimistic Iceland will become a member of the EU one day.

What does being a member of the ALDE Party and the wider global liberal family mean for you and your party?

We are very grateful to be a part of the family. And one day, hopefully, we will become a part of the EU as well, where we could work even more closely with the rest of our family. A stronger liberal voice within the EU will only stand to benefit the union and Europe itself.