Russian intervention in Belarus is already a fact

Putin is ready to intervene in Belarus. The West cannot shy away, as it did in Ukraine. Only a 'big stick' policy can turn the tide, argues ALDE Party President Hans van Baalen in this op-ed. 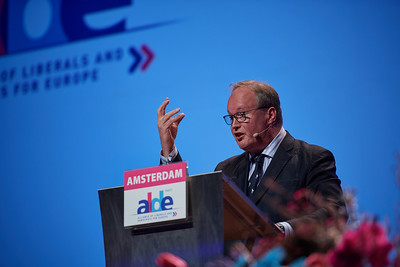 Vladimir Putin has in the past made it crystal clear that former Member States of the Soviet Union are ‘near abroad', meaning that he does not grant these now sovereign members of the international community the freedom to organise their society as they want and to decide for themselves what relations they wish to maintain with neighbouring states.

When these sovereign countries threaten to take an independent course, Putin intervenes, either by force, economic sanctions, cyber-attacks or a combination of these illegal means. Georgia, Moldova, Ukraine, the Baltic States, and Belarus have all experienced this treatment.

For each 'near abroad', Putin has a specific, toxic mix ready. Even in his own country, Putin has not put his poisons on standby. The poisoning of opposition figure Alexei Navalny is not an isolated case. Many opponents have suffered before him.

The international community is extremely reluctant to act on Russian intervention abroad and the suppression of non-violent internal opposition, preferring to stick to empty condemnations of Putin’s toxic acts.

The same applies to Iran and the People's Republic of China, where threats to democratic Taiwan and interventions in autonomous Hong Kong are usually only met with lukewarm reactions.

Those in favour of European isolationism believe that we are spared of evil if we look away from these abuses and do not interfere. They defend the argument that Putin was forced to intervene in Ukraine because of European interference in the Maidan uprising against Viktor Yanukovych.

Nothing could be further from the truth. President Yanukovych was deposed by the Ukrainian Parliament when his repressive and corrupt regime had become completely untenable as a result of massive and peaceful protests, not only on Maidan Square in Kiev which I was allowed to see for myself, but throughout Ukraine.

If, behind closed doors, the USA, EU and other free countries had told Putin that intervention in Ukraine would result in the exclusion of Russia from the international movement of capital and the blocking of the Nord Stream 2 pipeline, Putin would never have intervened.

A democratic Ukraine without Russian intervention would not have had to choose between East and West but could also have maintained good relations with Russia. This would have allowed Putin to save face.

However, amidst the smoke and mirrors, he went ahead with sending the infamous 'green men' (unidentifiable Russian troops) to Crimea and deploying Russian reserve units in the Ukrainian Donbass. This plan emerged long before the first European Union flag appeared on Maidan Square and foreign guests were invited to speak there.

In the case of Belarus, Russian intervention is already a fact. History is repeating itself. Putin has a difficult relationship with the survival artist Alexander Lukashenko, who, despite the Union treaty he signed with Russia, has managed to play the European Union, the USA and Russia against each other for past 26 years.

To this extent, there is a certain similarity between Viktor Yanukovich and Alexander Lukashenko. In both regimes, anything is permitted to survive politically. To Putin, just like Yanukovich, Lukashenko is a 'useful idiot' (dixit Lenin) who is only relevant if they serve, or at least do not stand in the way of, Russia's interest.

In this scenario, Putin can also do business with other representatives of the regime in Minsk and Russian benevolent forces. And the supply of ‘Green men’ is endless. Lukashenko is still serving Russian interests because he has asked Russia to support the repression non-violent demonstrations which are currently concentrated around Svetlana Tsikhanouskaya.

Putin has already said that he will mobilise police units to assist Lukashenko 'if the situation gets out of hand'.

The isolationists of the free world will once again say that we must look away, or we will invite Putin to intervene. However, this is a false assumption. Based on the experience of Ukraine, the free world must now take a stand, and tell Putin that he will burn his fingers if he intervenes. Rotating EU President German Chancellor Angela Merkel should take the initiative now. The suggestion by the chair of the Bundestag Foreign Affairs Committee Norbert Röttgen that Nord Stream 2 could be blocked if Russia will not independently investigate the Navalny poisoning case is simply not enough.

The free opposition in Belarus is operating with great caution, demanding only democratic elections and the release of all political prisoners while waving red and white flags; it is not asking foreign guests to address the demonstrations on Minsk’s Independence Square and is taking a neutral stance towards Russia. For the EU and the US, this means that we must, in the words of former US President Theodore Roosevelt: 'Speak softly and carry a big stick'. 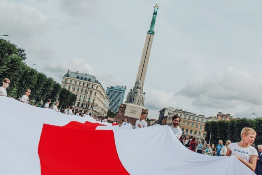