Standing with Ukraine the liberal way

On 24 February, President Putin’s started an unprovoked and unjustified military aggression on Ukraine, a deplorable act on a sovereign, democratic and pro-European country, and against our liberal values that we hold so dearly. The ALDE Party and its member parties stand united in condemnation and rejection of these actions.

On the same day, ALDE Party launched a petition calling for Putin to stop war and to stand with Ukraine and its people. We also called for massive and bold sanctions against the Russian government for these actions. The petition gathered more than 1.000 signatures.

On 28 February, ALDE Party leaders met in an extraordinary meeting to discuss the situation and proposed to grant temporary affiliate status to Servant of the People (Слуга народу/Sluga Narodu), the party founded by Ukrainian President Volodymyr Zelenskyy.

Furthermore, we are gearing up to make a sizeable donation to the International Committee of the Red Cross who are helping Ukrainian citizens on the ground. See how you can contribute here.

Stay up to date on the liberal efforts to support Ukraine in our dedicated website.

Our member parties and liberal leaders have shown solidarity and action since the beginning. From the local and regional levels to the European level as well as on the frontlines in Ukraine.

Fighting on the frontlines

Our member parties in Ukraine are taking action to defend their country.

Our MP of #Golos Roman Kostenko addresses parliamentaries and countries of the world #StandWithUkriane pic.twitter.com/rayFw5oERz

I learn to use #Kalashnikov and prepare to bear arms. It sounds surreal as just a few days ago it would never come to my mind. Our #women will protect our soil the same way as our #men. Go #Ukraine! 🇺🇦 pic.twitter.com/UbF4JRGlcy

🇺🇦 #ALDEParty VP Dániel Berg & @RenewEurope VP @katka_cseh send a strong message to Putin from Ukraine.
"The liberal family will push for the harshest sanctions possible & all our leaders support the people of Ukraine".
Sign our petition➡️https://t.co/wVyG1SD9E7#SlavaUkraini pic.twitter.com/hi8B8cM3MY

Over the weekend, ALDE member parties joined protests across Europe to stand with Ukraine and condemn the attack initiated by the Russian government. 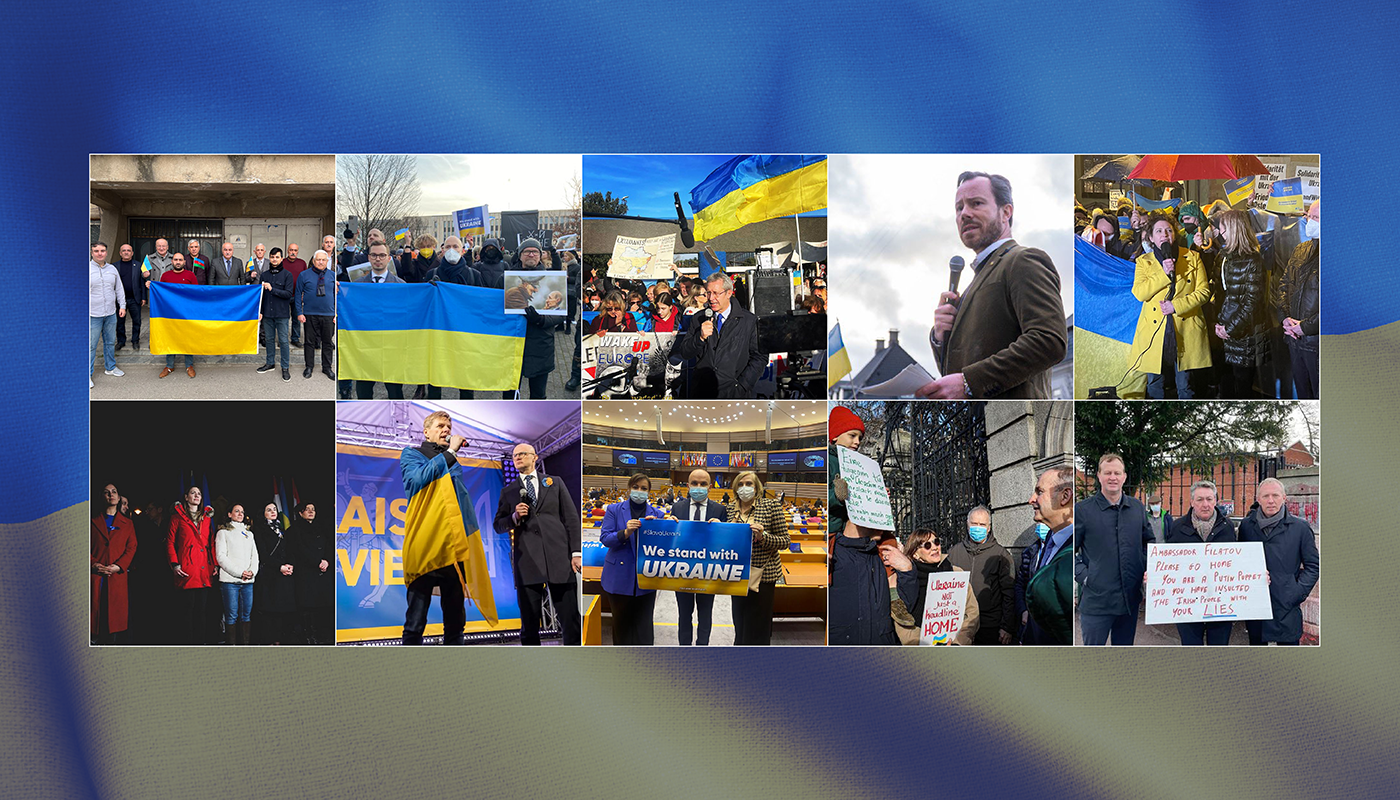 Not only are we going to donate to the Red Cross but our member parties are collecting first necessity materials, such as canned food, blankets, first aid kits, etc, to bring to Ukraine and to the refugees waiting at the border.

Sanctions at national and European levels

The European Union and its leaders have strongly responded by imposing massive and targeted sanctions on the Russian Federation, in particular its leadership. The sanctions include economic measures such as removing Russian banks from SWIFT, a ban on State-owned Russian media, and a new package of sanctions against Belarus. See more here and here.

Moreover, liberal European Commissioners are also taking action. Vice-President Vera Jourová and Commissioner Thierry Breton are fighting the disinformation and propaganda campaigns from the Russian government. Commissioner Kadri Simson is working to ensure a reduction of energy dependency and Commissioner Janez Lenarcic is ensuring that humanitarian aid is delivered.