It is our great pleasure to inform you that the ALDE Party Congress 2021 will take place on Friday 11 – Saturday 12 June. 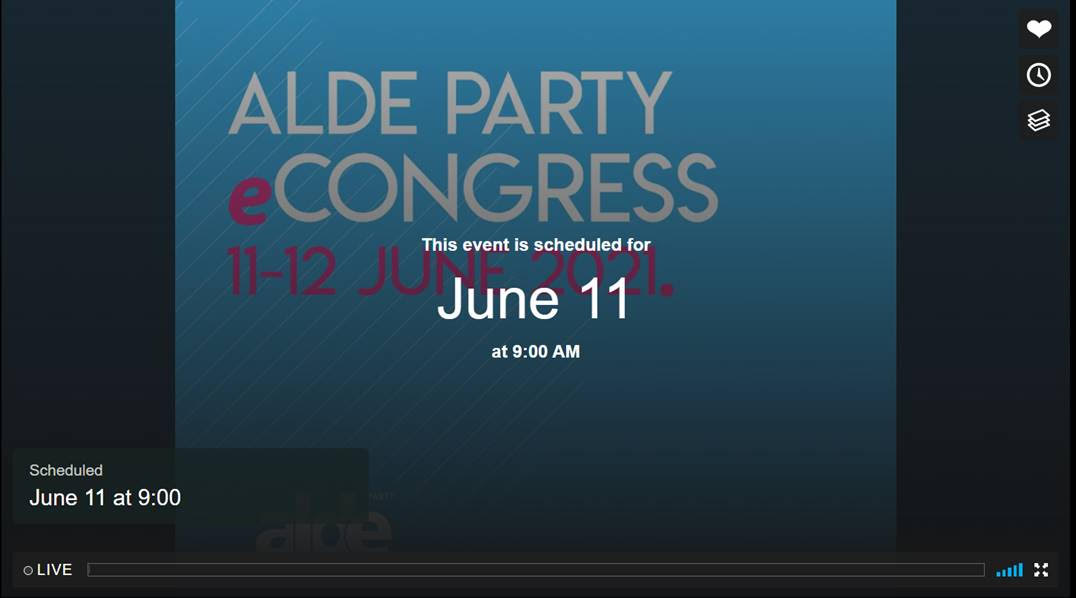 To attend the eCongress, please follow this link https://aldeparty.gatherdigital.com/apps/2818 to have access on the desktop version of our app!

The deadline for nominations as per ALDE Party's internal regulations was three weeks prior to the Congress and therefore passed at midnight CET on Friday 21 May 2021. The nominations received by that time are listed below. Please click on candidates names to see letters of their nomination:

Nominations received for the three positions of Vice Presidents:

Nominations received for the position of Treasurer:

The election procedures are outlined in further detail here.

Please note that in accordance with ALDE Party statutes the deadline to submit draft resolutions to the ALDE Party Congress is six weeks prior to the Congress.

Resolutions must be submitted via the online platform (debate.aldeparty.eu) by 23:59 CET on Friday 23 April.

International Officers may upload draft resolutions on this platform. If you have not received or cannot find your debate platform login details, contact Andrew on the details below.

Member parties will receive a consolidated dossier of all draft resolutions submitted at the latest by Friday 30 April.

Amendments to draft resolutions must then be submitted by Friday 14 May, also via the online platform at debate.aldeparty.eu.

Member parties will then receive a consolidated dossier of all amendments submitted to the draft resolutions by Friday 21 May.

Draft urgency resolutions can be submitted via the online platform debate.aldeparty.eu until Wednesday 9 June at 12:00 CET. They must not exceed 300 words and must deal with issues or developments that occurred since the deadline for regular resolutions (23 April).

Delegation lists will close at 12:00 CET on Friday 4 June.

After this point, changes can only be made in the statutory exceptional cases of flight cancellation, sickness, or unforeseen political developments. In such cases, please contact the ALDE Party Secretariat immediately [email protected]

Failure of the International Officer to assign all voting rights by this deadline will result in that delegation being unable to exercise unallocated votes.

Due to the virtual nature of the Congress meeting, all voting will take place via the OneTec voting system at: www.votingonline.eu

If you have been allocated a voting right as a delegate of a full member party that has paid its 2021 membership fees, you will receive your personal login credentials to access this voting platform by email.

This email will be sent from "[email protected]" so please also check your spam folder to check if you have received it. This login will be unique to you.

Voting during the sessions

If you are able to, we recommend logging onto this voting website using a mobile device, so that when the votes are called during the session, you have your own personal voting device in your hand. This platform also works via your internet browser.

You will be able to access the platform during the votes, but you will not be able to cast a ballot on a vote already held.

Voting in the Bureau elections

You will be able to cast your ballot for the Bureau elections via the OneTec voting system at www.votingonline.eu during the windows advertised on the programme.

Once you have submitted your vote, you will not be able to change it.

What if I hold a proxy vote?

If you have been allocated a vote and a proxy voting right by your member party, after logging in with your personal credentials, your vote will count twice when cast.

Voting rights were programmed into the system following the deadline on 4 June to submit voting lists.

Our voting system will not permit voting twice on the same vote.

Procedures for the election of the Vice Presidents and Treasurer

Election of the President and the Treasurer:

Election of the Vice Presidents:

“The Vice Presidents are elected on a single ballot paper. Delegates can choose as many candidates as they wish to up to the maximum number of vacancies to be filled.

In case of only one vacant position for a round of election, the principle of simple majority shall be used, as is the case with the positions of President and Treasurer.

Candidates failing to obtain the quorum in the first round can run in the second round where there will be no quorum. Those obtaining the highest number of votes are elected until all vacant mandates are filled.

If two or more candidates obtain the same number of votes for the last vacant mandate, an extra round will be arranged between those candidates to determine who will fill the mandate.

In the event that a sitting Vice President or Treasurer runs for the position of President, an additional mandate would become vacant should that person be elected President.”

In case one or several candidates miss the quorum, a second round of election will be held.

The returning officers will ensure anonymity of the votes by supervising the process and ensuring that the data is not retained following the vote.

What can you do with the app?

It is very important to Register and Login to the app. That way you can see all the details about sessions, exhibitors and the various speakers and bureau candidates. By registering, you are also enabling the possibility to message other participants and to participate in the discussion board activities and debates!

To find out how to login and register, click here.

Do you want to see the full programme for the eCongress, click on the menu option for the Programme and you will be able to see all the speakers and times for each session?

Click on the speakers to find out a bit about each of them and follow them for updates on their respective social media pages.

If you do not want to miss a specific session or you just want to customise your days? Make sure you are registered and logged-in and you will be able to favourite sessions and they will show up in your “My Schedule section”! You can even create your own events and reminders and add them to your personal schedule

Are you curious about the people running to be ALDE Party Vice-Presidents and Treasurer? You see the candidates’ biographies and their pictures in the Bureau candidate’s section. You can also find out when they will be debating and if they are participating in other panels by clicking on the candidate you are interested in.

Once you are registered and logged-in you can message other participants and get in touch with old contacts from previous congresses. If you want to discuss some of the great panels that we have for you this weekend, you can take part in the conversations in the discussion boards. Debate ideas and meet people that you may not have seen for a little while from across Europe!

Add a new discussion point if no one has created a topic that you want to debate and start people talking!

If you have a problem or a question and you are not sure who to get in touch with, click on the Info tab and you will be given options for who to speak with!

For further information about all aspects of the ALDE Party Congress 2021, including programme, content, speakers and meetings; practical assistance, resolutions, voting and elections; social networking and fringe programme, please contact the following members of the ALDE Party Secretariat who will be happy to help you.

The ALDE Party is looking forward to welcoming you to our 41st Congress the 11 and 12 June 2021.
This page contains specific information for the individual members of the ALDE Party.

Practical information
The 41th Congress of the Alliance of Liberals & Democrats for Europe Party will take place from Friday 11- Saturday 12 June 2021. Navigate through the pages via the buttons on the left side of this page to learn more about this edition of the ALDE Party Congress.

All individual members can draft a motion for a resolution. You need to gather support of at least 20 individual members and liberal associates.
The final versions of the draft resolutions must be submitted via e-mail to the elected Congress delegates by the latest on 23 March 2021. With the help of the ALDE Party secretariat, the Congress delegates will put the resolutions to an online vote among all paid-up members and associates in the month of April.

UPDATE 13.04.2021: the vote on the resolutions is taking place this week. On Wednesday 20 April, the names of the three resolutions that received most votes will be published on this page.