Europe’s values are the best way to defend against Russia 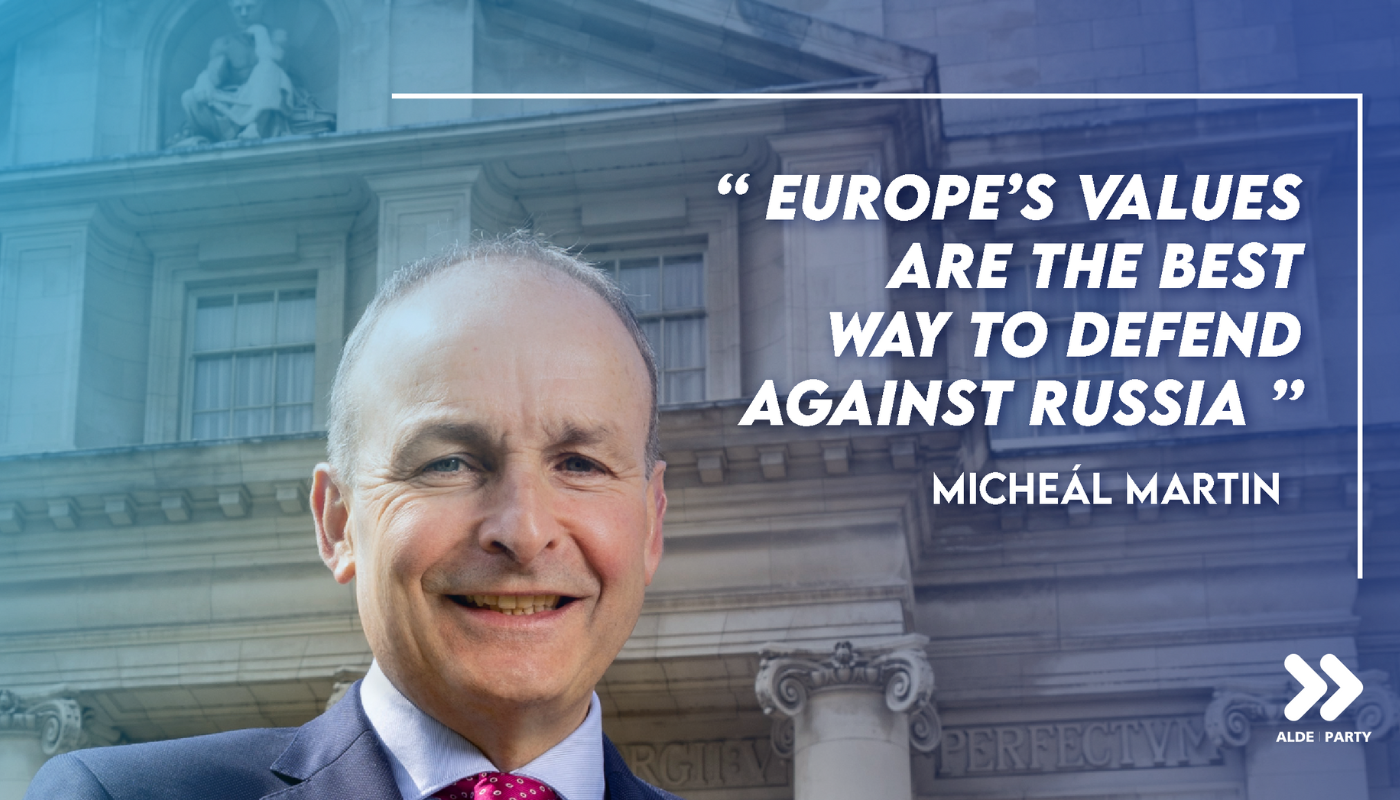 The 2022 ALDE Party Congress in Dublin is the biggest since 2019, and after several virtual events, it will be the first time in three years that liberals across Europe meet in person. We ask Micheál Martin, Ireland’s Taoiseach, what hosting the ALDE Congress means to him and how can we tackle issues like climate change, energy sufficiency and work for a better future for youth.

This interview was originally published in the ALDE Party Liberal Bulletin in June 2022.

After three years, European liberals are finally meeting in person for the ALDE Party Congress and your party, Fianna Fáil, is co-hosting the three-day event in Dublin. What does that mean to you?

For my party, membership of ALDE Party and the Renew Europe Group is hugely important. We were formed by a generation of leaders who secured our independence but always defined sovereignty in terms of a commitment to a strong, rules-based community of democratic nations. It was in this spirit that my party led Ireland into membership of the now European Union – and working for a successful Europe remains one of our core party objectives.

So it’s a privilege for us to host the Congress and for our colleagues from across Europe - particularly because of the critical challenges of this moment facing everybody who believes in free democracy and a strong Europe. I look forward to welcoming other party leaders and can assure them that we are looking forward too.

The success of this Congress will be not just if it is organised well, as it will be because of the great cooperation of the ALDE Party team and our party headquarters - but what matters more is that we come out of it with a renewed commitment and energy. The elections to the European Parliament in 2024 will be a defining moment for that chamber, and we have to do everything possible to maximise the voice of those who want Europe to stand up for its core values and protect the interests of its citizens. Party leaders, particularly those who participate in government, should take the time to build on our current excellent cooperation as we deal with a very challenging agenda.

You were previously Minister of Foreign Affairs of Ireland. How does your experience in the field help you and your government manage the Russia-Ukraine war? and how can we have a European Union less dependent on Russia economically and for energy?

I don’t think even those who have always distrusted Putin were fully prepared for the scale of the barbaric lawlessness and cruelty of Russia’s latest attack on Ukraine. No diplomacy could have handled such aggression and no concessions could have placated a regime like this.

The case for an urgent and permanent separation from reliance on Russian energy is unanswerable. This is not just about invasions and direct aggression, let’s not forget that Russia is the biggest funder and promoter of extremism and anti[1]democratic forces in Europe. So we need economic separation and we also have to fully commit ourselves to defending our democracies.

Our colleagues in the Baltics and other states bordering Russia see this with the greatest clarity, and we all have to join together in a united front. If we want to defeat the forces of authoritarianism and extremism then we have to understand that the rule of law, free media, anti-corruption activity, the protection of human rights and other core values are not side issues – they are fundamental to our work. Europe’s success and Europe’s values are the best ways to defend against Russia and others who wish us harm.

The fight to tackle climate change is a joint effort for all Member States, and targets for emissions reduction have been set for 2030 at EU level. What is Ireland doing to meet these targets?

Climate change is the defining issue of our generation. The political, economic and social dimensions of it are not just profound, they are becoming more urgent all the time. Even those few in the extremes who question the science cannot today deny that Europe’s fundamental freedoms require us to move to secure and sustainable energy independent of oil, gas and coal production.

The scale and pace of progress in new energy technologies is such that Europe has the possibility to achieve energy independence and meet urgent climate goals – what we need is the urgency and ambition to do this. That is why action on climate change has been a priority for our government from our first days in office.

We’ve introduced a legal obligation to have annual climate budgets in addition to the normal financial budgeting. As part of this, every branch of government and every policy has to be addressed in the context of its contribution to achieving carbon-emission goals. We’re investing in renewable energy and seeking to use our position as an island nation to become a leader in wind power.

And we’re also starting to address the issue of protecting biodiversity and introducing a wide range of education and training initiatives focused on sustainable development.

COVID-19 is still part of our lives and has been the biggest health crisis of this century. What is your assessment of the management of the crisis and what is still left to do to eradicate the virus and protect our citizens?

Every country needs to look for lessons to learn from the acute phase of the pandemic because we will undoubtedly face new public health emergencies in the future. In the case of Ireland, I believe we achieved a lot in minimising the terrible impact of the virus. Case numbers and deaths in Ireland are well below average, something which I think does link to an effective response.

We worked hard to keep people informed and to base our policies on the best available evidence. As understanding of the virus improved, and as new threats emerged, the response had to evolve. I tried to communicate with the public as openly and directly as possible. We were able to maintain a broad public consensus, and a lot of this had to do with the fact that we resolutely refused to play party politics with the pandemic. We asked people to trust the science and the good faith of government, and thankfully they did.

Of course the vaccines have been transformative and Ireland has one of the highest vaccination rates in the world. The only major limitation we had during the critical phase of the vaccine roll-out was limited supply. Thankfully we refused to get involved in efforts to grab short-term wins through using less-reliable vaccines and public patience held.

What we need now is for people to maintain the basic good practices adopted during the pandemic about how to limit the spread of all viruses, and we need to push vaccination rates even higher.

A further investment in research, vaccine facilities and public health expertise should be on everyone’s agenda.

Youth are at the core of the EU with a dedicated European Year of Youth running throughout 2022. What are your party and Ireland doing for youth’s future in order to facilitate opportunities and choices for all?

Education, training and employment opportunities are the fundamental foundations upon which opportunities and choices for young people have to be built. Everything else comes afterwards. There is no such thing in the modern world as a country with high living standards through society which does not also invest in the education and skills of its people.

For Fianna Fáil, education has always been one of our defining issues. Every major expansion in education levels in Ireland, ranging from basic education up to advanced research, was initiated by our governments. It’s the same for us today. In the two years of this government we have already reduced school class sizes, expanded training opportunities and supported both basic and applied research. The level of youth unemployment due to the pandemic was historically high, but it has been falling rapidly and employment levels are back to pre-pandemic levels. I think that’s a very practical demonstration of our support for facilitating opportunities for young people.

Of course we know that there is much more to be done, and in Ireland we have a particular problem due to rapid population growth putting huge pressure on rents and house prices – both of which are particularly impacting on young people. That’s why initiating a new era in the building of social and affordable housing is central to our work in government. The single most important thing we can do for the young people of Europe is to protect European democracy and equip the European Union to be able to promote a strong and successful Europe. I think that’s something all of us in ALDE should be able to agree on.