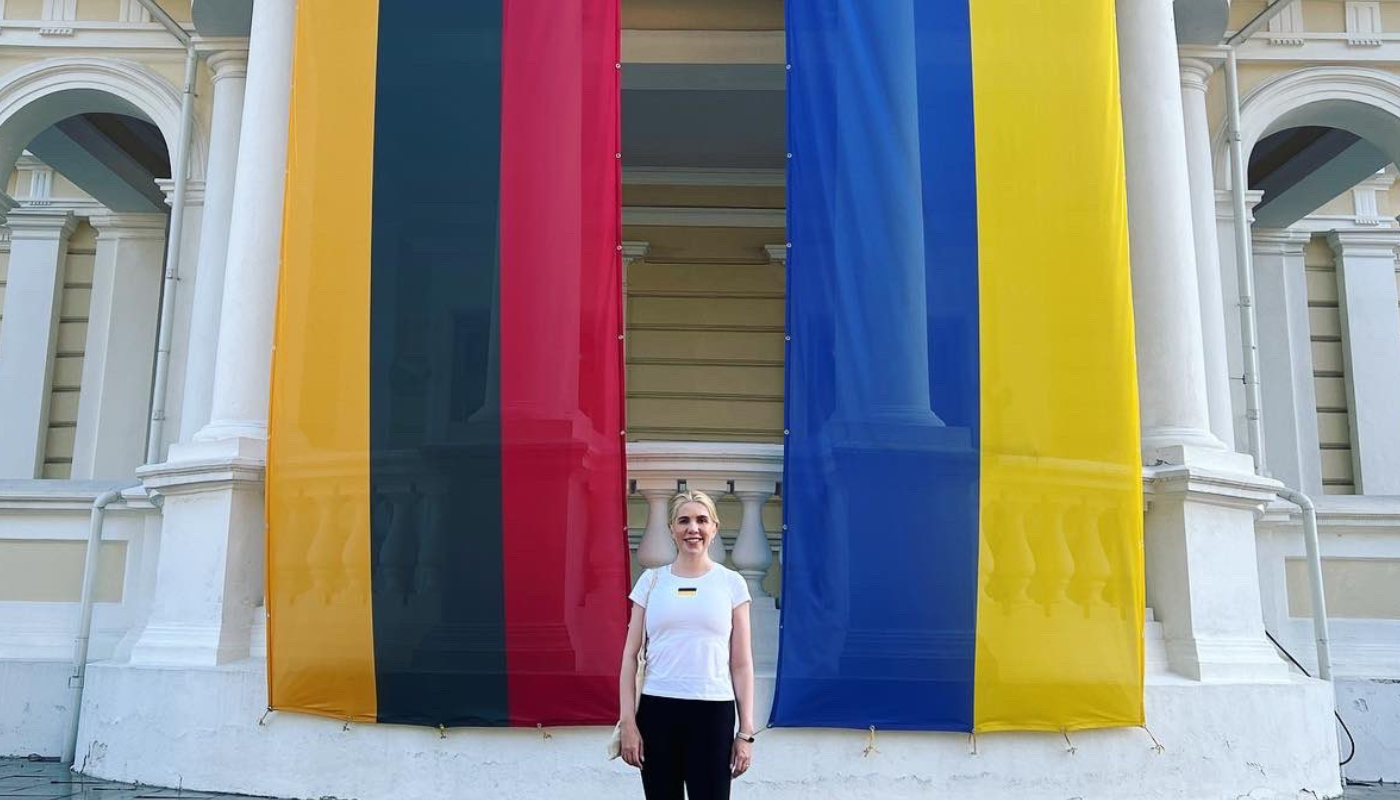 ALDE Party Vice President Kira Rudik travelled to Lithuania and Sweden last week where she met with the leadership of our member parties in the two countries to provide them with updates on the war in her country Ukraine and to ask for further support.

In Vilnius, Lithuania, she met with the Speaker of the Lithuanian Parliament Viktorija Čmilėte-Nielsen and Minister of Economy and Innovation Aušrinė Armonaitė – both also the leaders of ALDE Party member parties Liberalų sąjūdis and Laisvės Partija respectively – before addressing a joint session of both party’s MPs and met with the Mayor of Vilnius Remigijus Šimašius.

Today, we are in #Vilnius.
- city looks like Uzhgorod, my native town ❤️
- Ukrainian flags are at almost every building
- “Putin, Haague is waiting for you”, “Standing with #Ukraine”, “Praying for Ukraine” are the common signs for stores and shops

The support is AMAZING 🇱🇹🇺🇦 pic.twitter.com/2M3smvPXtw

A productive meeting with @VCmilyte, the Speaker of the #Lithuanian Parliament. We spoke about women's leadership. Lithuania is excited about our adoption of the #Istanbul Convention. Lithuanians will support us in the war with #russia. There is a long term collaboration ahead. pic.twitter.com/K1rKZDt3uK

#Vilnius will help rebuild #Ukraine! This was agreed at a meeting with Mayor of Vilnius @RemiSimasius. It will start with kindergartens and schools. At first, with the destroyed school in #Borodyanka. #Lithuania's experience will be very appropriate. Thank you, our friends! pic.twitter.com/KmZXRmSf6f

She also spoke to a group of female leaders from the liberal women's leadership programme of Liberalų sąjūdis.

Meeting with the #Lithuanian Liberal Women's Leadership Programme in #Vilnius. Sisterhood is supporting each other and getting results. Let's keep in touch. During the programme Women in Politics Lithuanian ladies will be raising funds for refugees and their families.
🇺🇦🇱🇹♥️ pic.twitter.com/kODCEQHUzY

After the meetings, she said: “Vilnius assured us of maximum support for Ukraine in the war with Russia. We received valuable advice: we now need to concentrate our efforts on working with those countries that are a little further away and more sceptical. Now it is important to bring them first-hand information and reinforce the relevance of the Ukrainian agenda.”

Later in Stockholm, Sweden, she met with Annie Lööf, leader of ALDE Party member Centerpartiet, and the rest of the party’s leadership and made a visit to Welcome House, a centre established by the city of Stockholm to help provide access to public authorities for new arrivals, to hear about their work welcoming Ukrainian citizens who travelled to the city fleeing the conflict. She also met with Fredrik Malm, deputy chairman of ALDE Party member Liberalerna, and Maria Nilsson, Party Secretary, and with members of Stockholm City Council.

The support of #Ukrainе in #Sweden is very strong. With politician @annieloof, leader of Centerpartiet, we considered issues of temporarily displaced Ukrainians. We visited #Welcome House centre. It helps Ukrainians with employment and English language learning. We are together! pic.twitter.com/FqPTsOXlw4

#Ukraine is the first country which #Sweden start helping with weapons after the years of being neutral. The strategic position of Sweden's #Liberalerna Party is to double aid to Ukraine. We were happy to hear that at the meeting with Swedish colleagues іn #Stockholm.
🇸🇪🤝🇺🇦 pic.twitter.com/mw6V4xn18O

This is an honest picture of how my life looks like now. I did 5 countries in 7 days and more to come. We need #weapons, we need #sanctions, we need #money. Our country needs to win the #war. And everyone of us is doing the best for it to happen soon. #Nomad #Congresswoman pic.twitter.com/eGvDFCmV8N

Having previously been in Brussels at the moment Ukraine received EU candidate status, she concluded her mission attending the 75th Anniversary Congress of Liberal International in Sofia, Bulgaria.